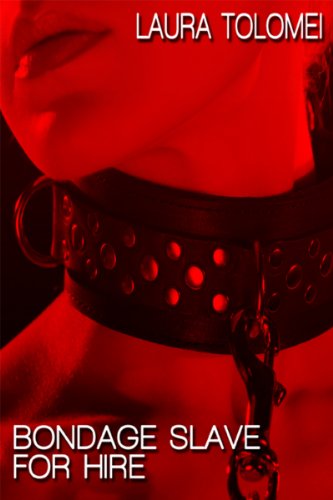 Lilly loves being a bondage slave.  When she saw Terry, then his two lovers, she decided they were the only ones that could be her masters.  What she didn’t know is what price she would have to pay if she wanted to live beyond Halloween.

Bondage Slave for Hire is the first book I’ve read by author Laura Tolomei and it won’t be my last.  Ms. Tolomei was very creative in her picture of slaves in this particular bondage club, with everything working toward one night of the year.  This story was very original, and not like anything I have read before.

As the story progresses, readers will start to get an inkling of what Julian and Andre are, but still won’t have a clue about Terry until the end. I was extremely surprised about Halloween night and how descriptive the author was, which borders on horror.

The chemistry, and later love, between the four main characters is apparent. The fact that Lilly was willing to do what she did could only have been done for love, even as she was being told she was not supposed to love the three men.

Secondary characters come and go, but each contribute to the story in their own way.  Readers will love some and hate others, but all add to the story and Lilly’s experiences with Terry, Julian and Andre.