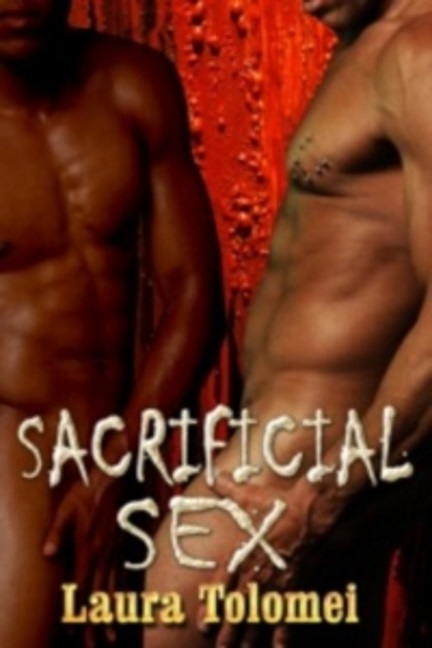 Mylos is the Blood Divine, the spiritual leader in a city ripe with a bloodthirsty legacy of human (and animal) sacrifice. It’s his job to conduct the sacred rituals involving the bloodletting and death of young virgins, and it’s something he greatly enjoys. Then along comes Rowen, a young man full of defiance who captures Mylos, like no one else ever has before.

Soon they’re bound as lovers, Mylos finding the release he craves in the arms of his blond but mysterious man. Rowen introduces Mylos to many things – sex with a servant Mylos occasionally only used for his own pleasure, and even sex with a woman, which is a feat, given Mylos’ absolute hatred of women in general.

But Rowen isn’t quite what he seems, and neither is the young lady who shows up as a sacrifice, yet confounds Mylos without even trying.

Sacrificial Sex is… hard to describe. It’s set in an intriguing science fiction world and I’d love to learn more of the places these people inhabit. It’s fairly well written, with very descriptive love scenes and brutal images of sacrifice and death.

My biggest complaint is that I honestly had a hard time keeping track of everything. The plot seemed to jump a good bit, and in the middle, took a turn I wasn’t expecting. While it wasn’t necessarily bad, it did leave me a bit confused.

Sacrificial Sex is a difficult book to read due to the meanderings it takes, but for some, it might be just right.