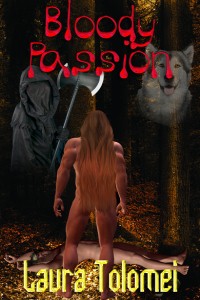 Far more than a story of sex, Laura Tolomei created a diamond in the ruff!

At a young age, Cedric exhibited signs of strangeness, like something dark and evil dwelling inside him. To rid herself of the evil sensation, his mother abandoned him with Korax, the village Druid, who also sensed Cedric’s dark shadow. Korax took the small boy under his wing and schooled him in the ways of the Celtic Druidism: herbs, village counseling, rituals, etc. Cedric was a unique boy; his dislike for women increased with age, and by eighteen, he still showed his inexperience for worldly curiosities, such as sex. Cedric’s frightening dreams of blood lust and prejudice toward women led him in his quest of sexual preference . . . men.

The day of All Hollow’s Eve, when the evil spirits rise out of their imprisonments to wander the earth, Cedric is to guard the fires from extinguishing, but instead a distraction approached that could satisfy his sexual cravings and quench his blood thirst. A being emerged from the forest, one that looked male and  . . . female wearing a medallion and coaxing Cedric with its words and sensual touch. After this event, Cedric aspired to learn all there was to know on pleasuring men, but while he slept visions of horror invaded his dreams, so intense he wondered if he was the person creating them; if he did have the evil existing inside him.

Then one day, after Korax left Cedric as the village Druid, a Hunter came upon their village seeking a great predator. Although, the Hunter’s quest was for the beast, he had another in mind who he wanted to tame. Is Cedric prepared to embark on this new twist of life? Will he find solace in the arms of the Hunter, learn the truth about the dark shadows that haunt him, as well as, his dreams, and finally come to peace with his fear of women? Join Cedric on his journeys with his lover, and let them take you soaring to new heights sexually and spiritually within.

Bloody Passion is far more than a story of sex, it’s packed full of adventure, spirituality, hope, ambition, and self-discovery. At first, I was not sure where the author, Laura Tolomei, was taking me, but that was short lived because events started taking place and coming together perfectly, making this story thrive. Not only does the characters development grow with each passing chapter, the plot is spot on and extremely intriguing; and with an abundance of sex sure to have you flushing and blushing. =)

There are a lot of emotions, sex (m/m – m/m/m – m/m/m/f), quests, and sensuality in Bloody Passion for me to go into detail, so I will just say; I honestly loved this story, far more than I thought I would. Laura Tolomei has created a diamond in the ruff, well worth experiencing for your-self. The only thing is we will have to wait for a sequel. (pout). Thank you, Laura, for the intense pleasure and sweltering heat you have given me by reading your book. I look forward to any of your stories in the future.