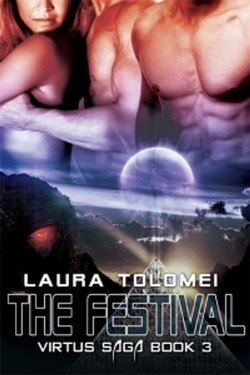 When Ylianor Meyer throws in Prince Duncan Caldwell's face his generous offer to adopt her into the Caldwell family, she has only one thought in mind--to get as far away from the stunningly gorgeous dark-haired prince and his equally striking blond-haired lover, Lord Christopher Templeton before she falls in love with them harder than she already is. Before she becomes their slave for real and surrenders to both without any shame. For each is a master in his own standing: one for pleasure, the other for pain.

Such is the new setting of the Virtus Saga, where nothing is as it seems. Not the world, since its all-pervading sex drive hides a scary lack of violence. Not the people, since soul mates Prince Duncan Caldwell and Lord Christopher Templeton share a love that is unrivaled until that fateful knock on Ylianor Meyer's dilapidated shack.

This book picks up right where The Game, Book 2, leaves off and extends love and passion into torrid sex and bloody nightmares. It's a unique connection, laced with jealousy and violence that are unknown to their world. This is not just another erotic dark fantasy series. This is the making of a trio. Of three remarkable characters that must overcome their uncontrollable lust to face the truth about themselves and their planet if they want to defeat the darkness about to devour them. To be as one whilst three! To share power and love in equal measures. This is their real challenge, the lesson they must learn. Otherwise, how will their world survive?

IMPORTANT: Given the saga nature of this ongoing fantasy series, it is advisable to read each book in sequence.

"Oh, no, lover, no you don't!" Springing to his feet, Chris went forward. "This has nothing to do with me or the way I treat her, which hasn't changed since you left me at Blue Oasis." Moving closer, their faces almost touched. "No, I didn't care about her then and I certainly don't now! If it's anybody's fault, my guess is it's yours."

"What?" Confused, the prince took a step back.

"Yes, you're the one who's changed toward her and maybe it's time you start asking yourself why...if you want to keep her, of course."

"Yes, you did, lover. Closing the channel between the two of you was a way of denying her, like telling her to stay out of your life."

That each of them had a strong power, or Virt as the ancients called it, was something Prince Caldwell had learned only recently. But why did mine have to begin and end with her, our silent communication the greatest joy and the darkest curse of my life? And why do I miss her so much, like I'd lost a piece of myself? Since I hushed her whisper in my head, I've become the loneliest man on this world and I can't stand it one minute more! Raising his head, he retraced his step, coming up against Chris again. "All right, maybe I tried to silence her voice." His lips curved in a wry smile. "But since Arthur died, things have been happening so fast and the sheer weight of them..." His voice trailed off, unsure how to tell his angel about the strangeness of it all.

Somehow though, Chris needed no words to understand. With a comforting embrace, he swept Duncan in his arms and held him tight. "I know it's hard." The hot breath whispered in the prince's ear. "Arthur used to tell me about the load, the blazing lights, the noise--"

"It's like when we were at the Nephis Valley, with the same bright flashes and the humming, only it never stops--not the lights, not the sound. And this damn shoulder, burning every time there's a new flicker or a higher tone." He shrugged. "I didn't think I could handle her, too, not with all this mess that's been running through my head."

"Because she's louder than all the other sounds combined?"

"Oh, Angel, you have no idea!" Pulling slightly away, Duncan gestured aimlessly in the air as if he wanted to draw a picture of what was tormenting him.

"And it's not only her. Both of you are stronger than whatever else is going on in my head. If your fire is the brightest star of all, which alone can dim the thousand lights flashing day and night, she's the loudest sound that no amount of humming can ever silence."

"From what you're saying, she's just as important as I am."

Duncan looked straight in his eyes. "I didn't think so at first, not until I cut off the connection. I believed I'd feel better without having her inside me, only to discover I'm unbearably alone if she's not there. It's like with Virtus. You don't know where it ends and you begin."

"And it's not just your head that misses her." Chris clasped his piece. "Your body craves her, too, even if you work hard at denial." Another squeeze, then the intriguing blue-gray eyes fixed on him. "At least, unlike you, I've seen it coming from the start, dreading it actually until I had time to think it over." Taking a deep breath, he looked as if he were about to seal his destiny forever. "It was hard enough to accept sleeping beauty in my life, not to mention in your bed, as a permanent fixture and I wished you had some other choice--the gods can testify to that. You, more than anyone else, know how much I love you and just being with you every day, every thirty-six-hours of it, is reason enough for me to live, even if I'm no nearer to understanding the magic you work on me than I was ten years ago. Yet somehow, you made her a part of it, too, and so damn well, I can't think of the two of us without her."

2 thoughts on “The Festival #MFRWhooks”