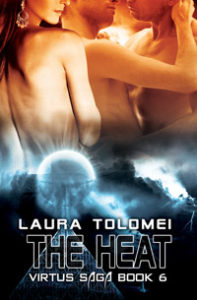 “It was nothing, and the leader had no trouble setting me back on my feet—”

“Yeah, he had a busy day yesterday, not to mention his night’s adventures.” Darek grinned.

“Why?” She had overheard the servants’ whispers in the morning, only had thought they referred to her mishap. “What happened?”

“Your mate didn’t tell you?” Although he had pulled back, Darek did not let her go.

“I didn’t see him this morning.” After waking up in a sweat over Arthur’s true or presumed revelations—she still had to make up her mind about which was which—the last thing she had wanted was confront either of her lovers. “I left him sleeping.”

“But you know, right, David?” Evidently determined to make her suffer, Lord Doyle looked at the man with a knowing wink.

“I heard about it, yes.” From the scowl on David’s forehead, it was obvious he did not approve of it.

“Come on.” Annoyed, Ylianor glanced first at one, then at the other. “Do tell.”

“Lady Templeton, after last night, I might just be envious of your mate,” Ribes cut Lord Doyle off.

“Now I’m really confused.” Swinging her gaze from Ribes to Darek, then to David, Ylianor was at a loss.

“I didn’t feel too well yesterday and—”

“That’s right.” Slapping a hand on her forehead, Kharen moved closer. “But now you’re better.” Her healing Virt kicked in, and Ylianor felt like she was being thoroughly checked. “I’m glad.” The last words were so soft and full of emotions that they went straight to Ylianor’s heart, especially since they were followed by a gentle caress on her cheek.

“Thanks, Kharen.” So Ylianor squeezed Lady Riyan’s hand. “But you can’t leave me wondering about what happened last night.”

“Well, it was something no one ever thought they’d hear—”

“Not from the leader anyway.” Darek pressed her on the opposite side. “But he said it, no question about it.”

4 thoughts on “The Heat #MFRWhooks”