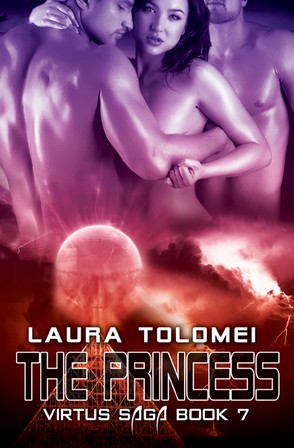 When Prince Duncan Caldwell finds himself alone for the very first time in his life, he cannot understand what has gone wrong. From his earliest years, he had been with at least one, if not both, of the two special people he had chosen and deeply loved. Christopher Templeton, his phase mate, and Ylianor Caldwell, his father’s heart child, have always been his reference points, the two fixed stars of his evolving destiny. His insane lust for both have further strengthened his bond to them during the apparently endless time they had already spent together. And yet…no matter how much he gets of them, it’s never enough. Not of Ylianor, his adored princess, born and raised in Black Rose, his own home. Certainly not of Chris, his beloved angel, met as a mere eight-year-old on the hills of the same Black Rose that had brought Ylianor to him. So why is he alone now?

That’s just the beginning of Book 7 of the Virtus Saga, where nothing is as it seems. Not the world, since its all-pervading sex drive hides a scary lack of violence. Not the people, since soul mates Prince Duncan Caldwell and Lord Christopher Templeton share a love that is unrivaled until that fateful knock on Ylianor Meyer’s dilapidated shack.

This book picks up right where The Heat, Book 6, leaves off and reconnects the princess to her amazing power. It’s a unique connection, laced with jealousy and violence that are unknown to their world. This is not just another erotic dark fantasy series. This is the making of a trio. Of three remarkable characters that must overcome their uncontrollable lust to face the truth about themselves and their planet if they want to defeat the darkness about to devour them. To be as one whilst three! To share power and love in equal measures. This is their real challenge, the lesson they must learn. Otherwise, how will their world survive?

“Robin and I both had phases, but they were nothing like theirs…” Jeff frowned as though deep in memory. “No one could come between them, and you can ask Carl Strepton for confirmation.”

Yeah, good old Carl. No, she had not forgotten him, either.

“Carl tried separating them without success. They were as thick and tight as if they were one and understood each other even without words, like they had their own language or something. I’ve never seen anything like it, but it didn’t feel right then or much less now. Today that one is the leader and the other is pledged to you.”

No, Jeff just could not get it.

“And the leader reaffirming their love in such a public and dramatic way then nominating him as co-leader no less…makes me wonder where you fit in all this.”

9 thoughts on “The Princess #MFRWhooks”