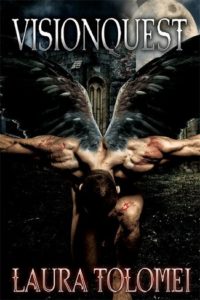 It wasn’t till he took me to his bed and made love to me, for the first time—no competition between us, no unspoken challenge, no master-slave, no blood, no death, nothing but intense emotions overwhelming me with the sheer power of his feelings, a sea so deep, a tide so strong I thought I’d drown as he took me face up, raising my legs above his shoulders and plunging deep before preying on my mouth, too, in a never-ending kiss that took my breath, not to mention my resolve, away—that in spite of everything, I gave him what he wanted most, my soul in its entirety, for I knew right there and then I was sealing my destiny forever.

"Enough!" A harsh voice commanded at one point.

As if they were a single man, the three stopped pampering me and stood up, crowding me to cover the source of the voice I was trying to glimpse through half closed eyes.

"Leave!" At this order, they all started to move away when he called one back. "Wait, Kristioff. Untie his hair and dry it."

I felt his rough handling remove my pin, the only worldly possession I treasured, and wet strands tumbled disorderly on my shoulders. Wrapping them in a towel, the man administered a series of vigorous friction, making my head shake from side to side.

"All right, now leave." Assertive in his tone, the Seigneuros indicated the staircase after he judged me ready.

In single file, I saw them leave, the sound of their feet shuffling on the first steps reaching my ears until I could hear nothing except the soft tide lapping the stone edges of the pool. And then I was alone with him.