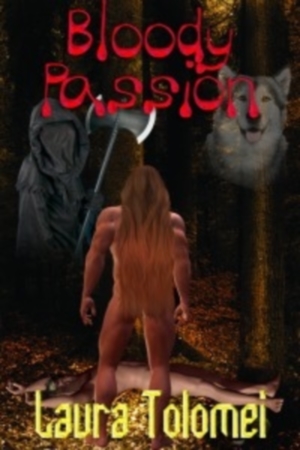 The book kept me engaged from start to finish!

Cedric was brought to a Druid for training when he was just a boy. “…he has dark connections,” claimed his mother. Perhaps, but these did not show through until one day, many years later, when his mentor abruptly left their village, claiming the darkness around Cedric and that which would certainly follow was too great to be overcome.

Sure enough, a creature of the night arrives and begins to steal the village’s animals as prey. The resultant hiring of a hunter and the friendship between he (Rory), the Druid (Cedric) and a young man named Newlyn, seals the fate of all involved.

One beast is killed, only to release an even greater and more evil monster. To capture this one, Cedric must solve the puzzle of a terrible nightmare that has plagued him for years, one he intuitively knows will reveal things better left buried.

In Bloody Passion Laura Tolomei has written a tight short story about the true, mixed nature of man, and what can happen if that nature is not controlled or put to work for the forces of good. I say short story, because the rest of her novel is filled with page after page of explicit male on male sex and an occasional m/m/m or m/f/m Ménage à trois.

This brings me to the critical portion of my review. First, Laura has/had no way of knowing I have publicly stated I will read no further works from eXtasy books. She sent me the book for review because we are internet friends. Having agreed in advance to the review, I will complete it.

There are the two issues I have with eXtasy books: Regarding the first book I read from this company, they stated quite clearly they were not taking editorial responsibility for the work being published; second, the sex was so much more prevalent than story, that I felt the story was nothing but a structure on which to hang the erotica. I went so far as to say there was an uncomfortable similarity to pornography.

Laura’s book? First of all, the editorial disclaimer does not appear in this book. Second, the overall calibre of writing is very good, although I did pick up on several misspelled, missing and misused words that a competent proofreader should have caught. The mistakes did not affect my reading experience. Third, while I feel there was again a disproportionate amount of sex to story, the work felt like a legitimate piece of fiction.

Bloody Passion went beyond my comfort zone for M/M erotica, but the book kept me engaged from start to finish. Laura Tolomei writes this type of fiction with a sure hand and obvious skill. If sizzling hot m/m erotica interests you, then I would say Bloody Passion will reward you for your time.