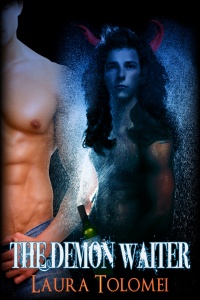 Mary's Naughty Whispers "Laura Tolomei should be on everyone's m/m lover bookcase. Her characters are very real and no matter if her imagination changed from hunting the demons to searching for the soul mate, from dark fantasy and horror to a bit more romance, her work will not leave you indifferent because each of her books are just like the human being behind the author's name... unique!"

6 thoughts on “The Demon Waiter #MFRWhooks”