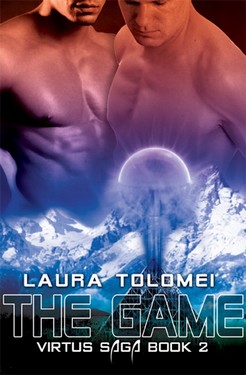 Such is the new setting of the Virtus Saga, where nothing is what it seems. Not since soul-mates Prince Duncan Caldwell and Lord Christopher Templeton share a love that is unrivaled until that fateful knock on Ylianor Meyer’s dilapidated shack changes everything forever.

This book doesn’t simply pick up right where Book 1 The Sex leaves off. This book explodes it all—the lust and the leadership, but also the estrangement and the chaos. Mostly the unique connection laced with a load of jealousy and violence that is unknown to their world. Because this isn’t just another erotic dark fantasy series. This is the making of a trio. The story of three remarkable characters that have to overcome their uncontrollable lust to face the truth about themselves and their planet, in order to defeat the darkness about to devour them. To be as one whilst three! That’s their real challenge. Because, if they can’t learn to share power and love in equal measures, how will they be able to ensure their world’s survival?

"If you never read anything of the Virtus Saga, this would be an excellent place to start. Not just because the hot scorching sex sets off the jealousy and competition between the three amazing characters that are destined to forge their world with new life. More because it's the beginning of an unforgettable trio that will hook readers from page one with their heated passion and undying love for one another."

Like a man awakening from a bad dream, the blond demon shook his head as if to clear it, then locked gazes with her. “I’m sorry. I didn’t mean to treat you like that or snap like I did.” He sighed. “Too much is happening too fast like at the Nephis Valley—”

“We were under a spell.” She offered sympathetically.

“Was it really? I’ve never wanted a woman as much as I’ve literally craved you, Ylianor. I prided myself on hating your gender, yet I was begging for your touch. I…” He turned his head away to stare at Duncan who had remained motionless, almost without breathing, she realized. “I cannot think it was only a spell because I wanted you with all my body, mind and energy. And it’s not an isolated incident.” Taking a deep breath, he swung his gaze back on her. “I thought I’d hate to be with a woman for so long, but I like you more than I care to admit even to myself and the worst is I keep thinking I might also miss you when our task’s over.”

Ylianor wanted to reach over and cradle his head, but remembering his painful energy lashes, did not dare. Yet, unexplainably he read her thought again, like he had just a moment before, and a slow, bright, dazzling, heartbreaking smile lit his beautiful face, leaving her breathless.

Grabbing the same hand she had almost used to pull him to her, the demon squeezed it fiercely. “Maybe I need to review some of my beliefs about women, maybe—”

“You need to consider people as human beings and not as genders or categories.” Duncan cut in, speaking for the first time. “Like I already told you, people aren’t just men or women. They’re individuals first and foremost. That’s why I don’t find it strange you should like Ylianor who is open minded enough to accept us as we are, even suffering through our loving and passionate sex.”

The demon shifted uncomfortably. “If I admit to this, I’d have to reconsider all my values. I mean, if I liked women where would that leave you, lover? Would I still love you?” Anguished, Chris could not even bear to look at the prince.

With an elegant slide, Duncan bypassed Ylianor’s sprawled frame to embrace Chris tightly and breathe in his ear. “I’d rather you asked yourself those questions, than love me because I’m a man.” A painful flicker crossed his eyes. “Did you choose me because I was in the right category?” The intense black gaze sought a truthful answer from the blue-grey eyes. “I’d give up this love in a second if this was the case.” The prince’s hand traveled lightly on the handsome features. “I dare hope I mean much more than just my sex, Angel, and that you chose me, not drifted my way because of my gender.”

The demon snuggled in Prince Caldwell’s embrace. “Well, you chose me that night at Arthur’s party—”

10 thoughts on “The Game #MFRWhooks”