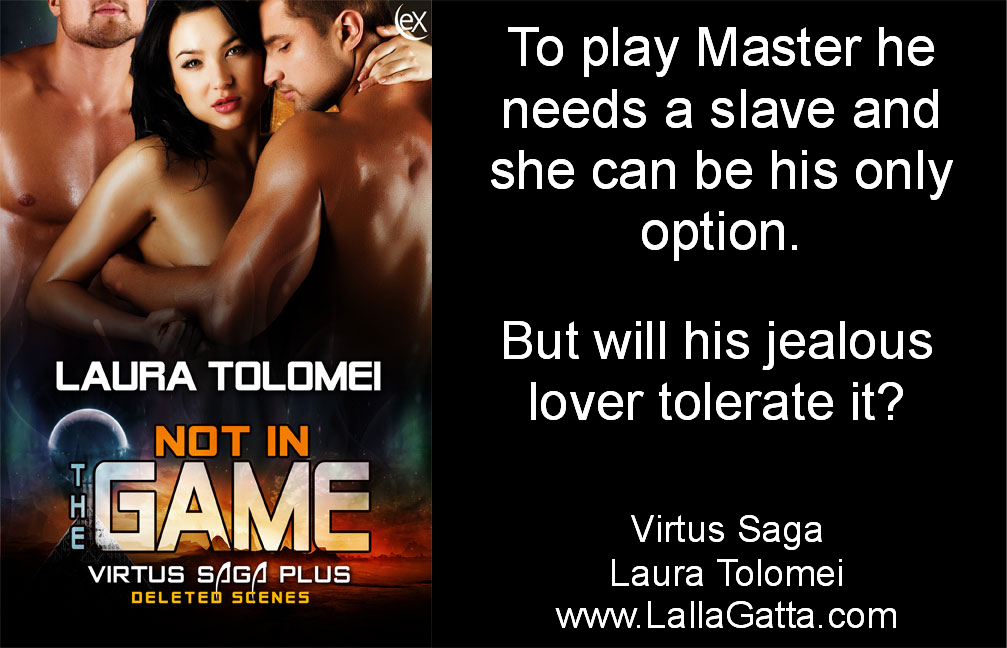 Until That Fateful Knock #MFRWhooks

To play Master, he needs a slave. She’s his only option. But will his jealous lover tolerate it?

To play Master, he needs a slave. Too bad she's his only option. That's why his jealous lover can't stand it!

I can’t wait to start on the serious sex.

No amounts of bodies could ever replace you, Princess.

"I can't wait to start on the serious sex," is Lord Christopher Templeton's announcement at the beginning of the sex-filled marathon that is Cecilia Hurst's Game of Masters and Slaves. But when Prince Duncan Caldwell, the love of his life, admits, "No amounts of bodies could ever replace you, Princess," he knows he's in serious trouble.

So he'll do whatever it takes to contrast the nosy witch's undue interference in a love that is his and the prince's alone.

Virtus Saga, where nothing is what it seems. Not since soul-mates Prince Duncan Caldwell and Lord Christopher Templeton share a love that is unrivaled, until that fateful knock on Ylianor Meyer’s dilapidated shack changes everything forever.

I am his sole interest!
(She needed a lesson demon-style)

"Worthy of the sluttiest of them all," Darcy wrapped it up nicely. "And we all know who that is."

"Yeah, 'cause he's unbeatable at the Hall." This was Fabian adding his two bits worth.

"Out of it, too," Anton was quick to set the record straight once and for all. "Since we're miles away from it here."

However, flattering their comments, Chris did not fall for their baits. Simply continued to ignore them, until a pillow hit him on the backside.

"Hey, what's the matter with you guys?" Now angry, Chris lifted himself on an elbow to glare at the group assembled near the fireplace.

"Quit sulking and get your ass over here." Retrieving the pillow, Darcy seemed ready to throw it again had Chris not complied.

"And what's the idea of showing up here with your gorgeous phase mate without telling us?" Fabian pushed back his shoulders as though getting ready for a fight. "It isn't like we didn't talk about it before the season ended at the Hall."

"Yeah, with all those who had received an invitation bragging their mouths off." Anton's scornful look was all for Patrick.

"Not my fault I got one," Patrick retorted. "And you didn’t."

"We told you we'd be here one way or another." Darcy shrugged indifferent. "And being guests was the best offer we got."
If he made it sound like it had been a piece of cake, Chris knew for a fact it had not, since their wheeling and dealing to weasel into the Game had been the one single topic at the Hall for months on end.

"While Chris, here, had said it over and over that he wouldn’t have come." Fabian's gaze narrowed on him. "Not even if he received an invitation."

Which, lucky for him, he had not. For he was way too young for Cecilia's age requirements.

Or maybe luck had nothing to do with it. And given how much the woman loathed him, he would never get one.

Not even if he lived to be a hundred.

"It was a last-minute decision." For how the fuck was I to know that Arthur was going to order us to retrieve a damn pyramid that Cecilia and David had the bad idea of stealing? And that our only option would be to enter her ludicrous Game since my lover had received an invitation?

No, make several of them.

"Nothing I knew about when we were all talking about it. "And how convenient for his lover and for his growing attachment to the pesky nuisance he had been dragging along since he had set foot out of Black Rose.

"Just for the record, did you get the invitation?" Anton smirked. "Or did your mouthwatering phase mate?"

"Come on, Anton!" Patrick scowled at him. "The way Cecilia hates Chris; how can you possibly think she'd invite him?" He snickered, “Besides, Chris isn't even old enough to receive any damn invitation."

Didn't prevent her from sending one to my lover for the past three years or so.

Chris would have liked to shout this, had it only improved his situation any.

"And if that weren't enough, just seeing how she looks at your phase mate is enough to know she'd much rather invite him than you." Darcy seemed to have it all figured out.

Which boosted Chris's rage to a new breaking point.

"She was practically eating him up with her eyes alone. “Patrick smacked his lips.

"We all were." Anton sighed wistfully.

5 thoughts on “Until That Fateful Knock #MFRWhooks”